Four Patriot baseball players have been named to the Louisiana Baseball Coaches Association (LBCA) Composite All State Team. This team is comprised of all classifications and divisions and is voted on by the members of the LBCA. Cade Beloso was named the state’s hitter of the year and Will Ripoll was named the pitcher of the year. Jay Curtis made the team as a utility player and Ian Landreneau was selected as a pitcher.

The pitcher of the year selection must have been a very close one as Landreneau had just as good of a year than Ripoll and both are deserving of the award. Compare the two pitchers: Landreneau threw 68 innings, while Ripoll threw 67 innings. Both posted identical 10-0 records. Ripoll added 4 saves to his resume. Landreneau just barely edged Ripoll in the ERA category as Ian posted a 0.95 ERA compared to Ripoll’s 1.09 ERA. Ripoll, however, struck out 101 batters compared to Ian’s 72 strikeouts. Landreneau is the school’s all-time leading wins leader, as he recorded 22 wins in his career as a pitcher at JCCS.

Curtis is the most decorated baseball player in the history of wearing a John Curtis Patriot uniform. He is the only player in Patriot history to win three state championships in their career. Jay was the starting third baseman for the Patriots’ 2015 state championship team, as well as the starting catcher on the 2017 and 2018 teams. Leading to his all state selection was the tremendous year he had. Jay was second on the team (all to Beloso) in average (.394), home runs (5) and hits (39). Adding in 6 doubles, 2 triples and 25 RBI’s to go along with 25 walks to his stat sheet was certainly a big accomplishment amid the difficult schedule the Patriots’ played all season long. 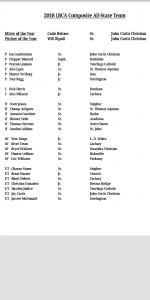