For the first time since the 2015 season, the Lady Patriot volleyball team will play in the state tournament at the Pontchartrain Center. They advanced to the quarter-finals in convincing fashion with a three game sweep over Catholic High School from New Iberia.

Before a packed gym and a raucous crowd, the homestanding Patriots came out hot jumping out to early leads, then dominated down the stretch in games one and two, winning 21-11 and 25-16. In the third game, however, the Patriots faced some adversity. The Patriots found themselves down 7-2 early. However, they were determined to sweep the Panthers and not get to a game four. The Patriots stormed back and eventually won game 3, 25-18 to win the match and advance to the quarter finals.

The Lady Patriots will play Thursday against the #2 seed Notre Dame Pioneers at a time to be determined by the LHSAA. The Patriots will find out what time they play at some point on Monday, before 3:00 PM, according to the LHSAA website. Be on the lookout for game time and come support the Lady Patriots Thursday! 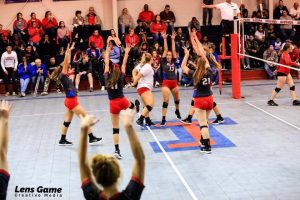