It’s not often you get to be the first one to win a state title in the John Curtis Christian School athletic department. The girls indoor track and field team did just that Saturday by winning the state title. The team entered the last race of the meet with a 56-55 lead over second place St. Joseph’s. The relay team, comprising of Tea Harris, Raven Nunnery, Diamond Smith and Laila Jackson finished in second place, while St. Joseph’s finished seventh. With that, the Patriots were able to win the meet with 64 total points. St. Joseph’s finished with 55, while Zachary finished in third place with 38.5 points, Lafayette finished in fourth with 32.5 points and Ruston in fifth place with 21 points. The only other local team to finish in the top 10 was Edna Karr with 14 points, finishing 10th overall. Here are the girls who got points for the Patriots track and field team. 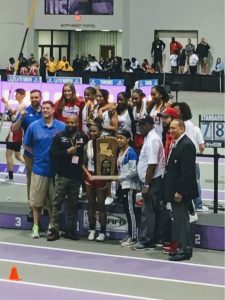