Opinions differed when the argument came up about which championship program would have the upper hand when the schedules were released and saw the John Curtis Christian Patriots matching up against the Karr Cougars in the season opener. Those in favor of the Cougars pointed to the 27 game winning streak, the back to back to back state titles and the 43-1 record over the last 3 seasons. Those pointing to a Patriot victory pointed at a 9-1 overall record against the Karr Cougars in the series. However, 8 of those games were played over 10 years ago. They also pointed to the 27 state championships and the fact that the Patriots came in as the Division I defending state champions and were nationally ranked. No matter who you picked as the winner, there certainly were no losers on the field last Thursday night. Both teams fought with everything they had, with the Patriots holding off a Karr rally to win 42-39.

The Patriots special teams, which has been a staple of J.T. Curtis coached teams, flexed is muscles early as junior Caleb Spann took the opening kickoff around the 5 yard line and raced all the way to the 8 yard line for a huge start to the game. Three plays later senior QB Collin Guggenheim plunged in from a yard out for a 7-0 lead after Austin McCready made the extra point. The defense took control for most of the first quarter, however the Cougars tied it up on a 45 yard TD pass midway through the first quarter. After one quarter of play, the teams were tied at 7.

The second quarter saw the Patriots’ senior running back Corey Wren race in from 33 yards out. However, a missed extra point made the score 13-7. Karr took little time in responding, scoring just 2 minutes later and taking a 14-13 lead. However, with just under two minutes remaining in the half, the Patriots’ Wren scored again, this time from 42 yards out and a 20-14 lead. The Patriot defense would create a turnover on downs when they turned away a first and goal for the Cougars with just a few seconds left on the clock. Jourdan Stipe defended a pass in the endzone on fourth down to help turn the Cougars away with no points. That defensive stand proved crucial in the outcome of the game.

The Cougars would regain the lead briefly in the 3rd quarter when a 32 yard TD pass and extra point put them up 21-20 midway through the 3rd quarter. The Patriots didn’t waste much time as they methodically drove down the field with senior running back Shane Goins eventually scoring from 2 yards out for a 27-21 lead. The Patriots were finally able to break serve and hold the Cougars and create a little bit of cushion as a 10 yard TD run from Guggenheim gave the Patriots a 33-21 lead. A crucial offsides penalty on the Cougars gave the Patriots an extra point attempt from inside the 2 yard line. So, the Patriots decided for the 2-point conversion attempt and senior running back Tony Alexander easily scored the two points giving the Patriots a 35-21 lead. If you thought the Cougars would go away, you thought wrong. Less than 2 minutes later in the game, the Cougars had a 52 yard TD pass to slice the lead to 35-27 after a missed extra point attempt. The Cougars defense then held the Patriots and forced a punt, then moments later came a 37 yard TD run to cut the lead to 35-33. The Cougars then went for two, but the Patriots stopped them short to keep the two point cushion for the Patriots. The senior QB, Guggenheim, then marched his offense back on the field. The offensive line then took the game over and marched down the field. Left to right along the line was Rudolph Bolds, John Drake, Joe Dalferes, Juan Gonzales and Robbie Pizzolatto. Throw in tight end Conner Orgeron and the Patriots scored a touchdown with 1:40 remaining in the game and a 42-33 lead. The nine point cushion seemed like enough, but would it be? The Cougars took back to their air attack and would eventually score on fourth down with just 7 seconds left in the game to cut the lead to 42-39. After an unsuccessful two point attempt, the Cougars would try an onsides kick. After 3 tries, the two previous tries were nullified because of an offsides penalty, the Patriots finally fell on the kick and the offense took one knee to end the game.

It was a fantastic battle between two championship programs and teams. Both teams were ranked #1 in their respective class, the Patriots in 5A and the Cougars in 4A. The game was a thrilling three hours long and did not have many dull moments. From the fireworks in the sky before the game to the aerial assault from the Cougars to the explosiveness of the Patriots run game, a great time was had by all in attendance.

The Patriots are back in action this Saturday in Shreveport in the Battle on the Border game taking place at Independence Stadium. The Patriots will face Westlake, Georgia, Cam Newton’s high school team. Kickoff is set for 3:00. 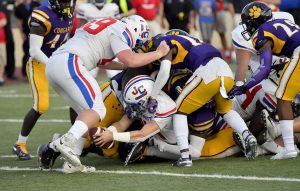