The offensive statistics upon first glance are good, but not eye popping. Until you dive into them. The Patriots were able to overcome 4 turnovers, 3 fumbles and an interception, to defeat the St. Augustine Purple Knights 36-22 Saturday night at Tulane’s Yulman Stadium.

Consider this…the Patriot offense only ran 31 total offensive plays for the night. Yet, scored 36 points, three touchdowns. So, they scored 1 out of every 6 plays, approximately. They rushed for 359 yards in total, which is an average of nearly 14 yards per carry. Quarterback Collin Guggenheim scored on runs of 52 yards, 42 yards and 76 yards, respectively. Running back Corey Wren sprinted past the Purple Knight defense for a scoring jaunt from 88 yards out.

The problem with scoring that quickly and running so few plays, plus turning the ball over four times is that the defense is on the field…a lot. Although the defense had some lapses, they flexed their muscles, and showed their stamina, in the fourth quarter. With the score tied at 22, the Purple Knights intercepted a pass and the offense threatened to take the lead mid-way through the fourth quarter. That’s when some key defensive plays were made to force a field goal. The field goal flew wide left and the Patriot offense took over. Two plays later, Guggenheim outran the entire Purple Knight defense from 76 yards out to give the Patriots a 29-22 lead. The special teams and defense then took over. Kicker Austin McCready had booted every kickoff into the endzone for a touchback. However, this one came down at the one yard line. No worry. The kickoff team unit tracked the Purple Knight returner down around the 20 yard line. The defense stepped up big time with an incomplete pass, tackles for losses and sacks to pin the Knights at the 1 yard line. Guggenheim capped the scoring with a 1 yard TD run for a 36-22 lead.

A big shout out to the Patriot fans for showing up en masse, and especially the student section for the energy they brought to the game and team. The Patriots will face the Lake Placid Dragons from Florida on Friday night at 7:00 at Pan American Stadium. The theme for the student section is Beach Theme. 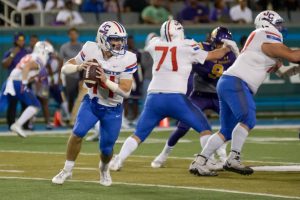