The 2019 cross country teams have enjoyed a competitive season so far. Most recently, individuals competed at the All State Sugar Bowl meet and the prestigious Catholic High Invitational. Runners competed well in both events. Justin Unger even ran the second fastest time in John Curtis Christian School history as he posted a 3-mile time of 15:36 in the Catholic Invitational. Alex Keller placed 8th in the Sugar Bowl meet this past weekend. Other runners include Dylan Simon, Jonathan Felipe, Landry Graves, Samuel Smith, Cristobal Molina, Trent Bairnsfather and Trey Curtis. The team placed 10th overall in the well attended event that featured 43 cross country programs from all classifications and divisions.

On the girls side, Sydney Rivers, Madison Reado and Cassidy Buchanan have been the most consistent runners for the Patriots this season. We look forward to their continued progress through the season.

The teams will run in the district meet on Wednesday, October 30th at City Park. Please support the cross country program and their coaches, Preston Curtis and Howie Inman. 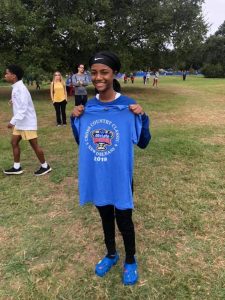