It’s the Patriots vs. the Raiders. The schools are separated by a mere 6 miles. The teams will meet halfway and play Friday night at East Jefferson’s Joe Yenni Stadium at 7:00. When the Patriots entered the league in 2015 many questioned whether or not the Patriots could handle the depth of the league and the schedule that each team had to play. The Patriots dropped their opening league game in 2015 to Brother Martin. They also lost to Rummel in the regular season in 2015 and were eventually eliminated from the playoffs by the Raiders in 2015, as well. The team did go on to win every other league game that year, finishing 4-2. Combining that, with the state championship loss to the Jesuit Blue Jays in 2014, it looked like the pundits may have gotten it right. As ESPN’s Gameday host Lee Corso would say, “not so fast, my friend!”. The Patriots have responded in a resounding way. They are currently on a 21 game winning streak in the league. The only other program in recent history to have this type of success in the league is…you guessed it…the Rummel Raiders.

Rummel enters the game against the Patriots with their best team and season since that 2015 game. They come into the game with some eye popping numbers. Sure, the 8-0 record stands out against some great competition. However, it is the job their defense is doing that is astounding. The Raider defense has given up just one touchdown all season long…ONE. They have only given up two field goals on top of that. Combining all of that, they have given up just 13 total points! Holy Cross is the only in state team to score on the Raider defense. They yielded one field goal to Charlotte (N.C.) Catholic and Oak Grove, MS.

What do the Patriots counter with? Offense! The Patriots have scored 418 total points this season. That is good enough for an average of over 52 points per game. That places them at the top of the leader board, at the time, of the most prolific offense in Patriot football history. The best an offense has ever done was averaging 48 points per game. However, that was for the entire season. There is still a lot of football left for the Patriots, including the regular season finale against the Brother Martin Crusaders, who is 7-1 overall and 3-1 in league play. Their lone loss? The Rummel Raiders.

So, something will have to give Friday night at 7:00. The matchup of the Patriot offense vs. the Rummel defense is certainly one to watch. However, the Patriot defense vs. the Rummel offense could be the matchup that wins, or loses, the game. Historically, the Patriot defense has been very stout. The Patriots have been banged up all season long and have not gelled together yet. After yielding 31 points in one half against the Holy Cross Tigers last week, their PRIDE was checked at halftime. How did the defense respond? By shutting out the Tigers in the second half. It will take that kind of intensity and effort in order for the Patriots to be successful.

Tickets are just $7 for this game Friday night. Conditions should be pristine with the beautiful, cool New Orleans fall weather Friday night. This is the most anticipated district matchup the league has had in the Patriots five seasons in the league. Heck, perhaps, it is the most anticipated matchup the league has seen dating back before the Patriots entered the league. You can buy tickets online by clicking this link https://gofan.co/app/events/68810 and purchasing your online ticket. Or, you can buy your ticket at the school. Both tickets are $7. The price goes up once you try to purchase at the gate, the day of the game. You will also be able to skip the purchase line if you have your pre-paid ticket in hand or downloaded on your phone through the GoFan website. We are anticipating a high demand for tickets, so get their early to get your seat! 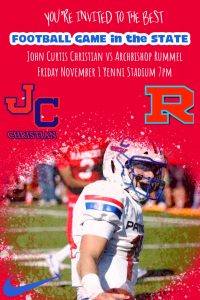