John Curtis Christian School will induct two outstanding alumni, Dr. Joseph Stagni, class of 1982, and Frances Boffone Kuehne, class of 1998, into its Patriot Hall of Fame. We would like to invite all alumni, students, parents, and friends to celebrate their induction on Friday, November 8, 2019, during halftime of the John Curtis Christian School football game vs. Brother Martin at Yulman Stadium.

More about the inductees

Frances Boffone Kuehne began her journey at John Curtis Christian School in first grade and graduated in 1998. Frances was named Miss Patriot at graduation for her outstanding achievements, both on and off the field. At the Senior Athletic Awards ceremony, Frances was recognized as the Outstanding Female Athlete of the Year. In volleyball, she was an All-District player for all 4 years of high school. She was also a member of the Volleyball All-Metro, All-State, and Academic All-State teams her senior season. In softball, she was a 5-time All-District player, a 2-time All-Metro player, and was a member of the All-State team her senior season. In basketball, Frances was the first Patriot in school history to score 2,000 career points and finished with 2,327 points for her 4-year basketball career. She was a member of the All-District, All-Metro and All-State basketball teams.

Frances graduated with honors and in the top 10 in her class. She was actively involved in her school community by showing school spirit and her love for everything JCCS.  She served as the senior class secretary and was a member of the school’s National Honor Society, Interact Club, and Student Council. Her Patriot pride was instilled by her parents Susan and Terry Boffone.  They never missed an opportunity to support the Patriots.

Frances earned a scholarship to continue her education at Loyola University and received her degree in 2002. She then began working at her family’s business, Progressive Barge Line. She served as the President there until 2018.

Currently, she serves as the Director of New Orleans Bunkering and Business Development for Savage Inland Marine. She is on the Board of Directors for the American Waterway Operators. Frances has continued her desire to help others through humanitarian efforts. She is a co-founder and vice-president of Every Friend Needs Love, a nonprofit charitable organization. She is a member of Riverside Church, an avid traveler, and a New Orleans Saints fan. She is married to Matt Kuehne and they have two children, Charlie (1st grade) and Michael (Kindergarten), who both attend JCCS.

Dr. Joseph (Joe) Stagni graduated from John Curtis Christian School in 1982. Joe was a member of the 1981 state championship track team, but was most known for his prowess on the basketball court. Joe was a 4-year starter as the point guard of the basketball team. He displayed the best attributes of a point guard with excellent dribbling, passing, and outside shooting skills. He played for Hall of Fame basketball coach, Joe Barcelona. Under Coach Barcelona’s guidance, Joe became only 1 of 3 JCCS basketball players to ever eclipse 1,000 points. Joe finished his career with 1,660 points, all while there was no 3-point line. He led his team to three district championships in his four seasons and brought the Patriots to the school’s first ever semi-finals and state championship games. He was selected to the Top 24 All-Tournament team, and was named All-District MVP, All-Eastbank MVP, and All-State. While at the tournament he was recognized by sports writers  as one of the most valuable players . He represented the Patriots at the 1982 All-Star game where he was billed as one of the best players to play in that game.

After graduating from JCCS with Honors, Joe attended Nicholls State University on a basketball scholarship. He continued his education at Texas Chiropractic College where he graduated with a Bachelors of Science in Human Biology and a Doctorate of Chiropractic degree. For two decades, Joe practiced as a chiropractor and was honored by the Physical Therapy, Chiropractic and Hospital Associations. Throughout his career, he became involved in business and civic organizations. He was appointed by governors and mayors to serve on Boards and Commissions at the State, Parish, and City levels of government. He was the first Kenner resident to be awarded the statewide Monte Lemon Award for his work in Merit Civil Service. He was elected to serve as a member of the Kenner City Council from 2006 to 2014. In 2017, he was elected as a State Representative, which is the position he currently holds today. Joe has been honored as the “Legislator of the Year” by the Alliance of Good Government and honored nationally by the Leadership Training Institute.

Joe is married to Denise Contavasprie Stagni. They have two sons, Joseph and Andrew, who both attend Loyola University. Andrew also played for the JCCS basketball team. Joe and his son Andrew are the first, and only, father/son duo to be members of the 1,000 point club in basketball. He is an active member of Our Lady of Perpetual Help Church where his sons are altar servers. 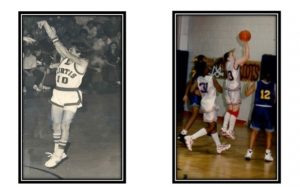