The Patriot football team came up just short in an overtime loss to the Rummel Raiders Friday night before a capacity crowd. Whether it was by inches, or feet, it didn’t matter. The object is to get the football across the goalline in order to score points. The Patriot offense simply couldn’t plunge in from the three yard line where the ball was snapped from. The game lived up to the hype that featured two of the top teams in the state, across all classifications. It was billed as the national game of the week, as well.

It looked like the vaunted Patriot offense would be able to score more points in one game than any team this season. Matter of fact, the Raider defense had only given up 13 points the entire season. One touchdown to Holy Cross, one field goal each to Charlotte (NC) Catholic and Oak Grove (MS). The Patriots scored one touchdown in the first quarter and one touchdown in the second quarter to give them a 14-0 halftime lead. The first score came on a 7 yard TD run by Corey Wren. The second came on a 24 yard pitch and catch from Collin Guggenheim to Javon Davis. The Patriots also missed a field goal late in the second quarter that would have extended the lead.

The game would only take one overtime period. The Raiders got the ball first and were able to pitch and catch a touchdown pass on 3rd and 10. With the extra point being good, the Raiders led 21-14. The Patriot offense only took two plays to score and pull to within a point at 21-20. Following a time out, the Patriots decided to go for the two point attempt. Guggenheim got very close to scoring but couldn’t push the ball across the line. 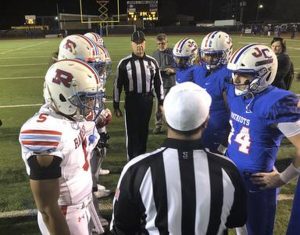