For the first time ever, the Lady Patriot basketball team hosted a semi-final contest on our home court. Again, for the first time ever, they will host the state championship on our home court. This is the second straight season the Patriots and Cubs will meet for the state title. Last year’s title was played in Rapides Coliseum in Alexandria, some 3 hours away from both schools. The game was sparsely attended. This year will certainly be different, as we saw at last night’s game. The attendance was near capacity and the crowd was raucous. However, the Patriots did what they’ve done the last three years…dominate. The Lady Patriot basketball team is looking for their fourth state title in a row this season. To do it in front of a home crowd is something special.

The game started out highly contested until the Lady Patriots went on 8-0 run to distance themselves late in the first quarter for  a 16-8 advantage. Ironically, the second quarter scored the exact same amount of points for each team and the Patriots were able to continue to double up Dominican’s score. They led 32-16 at the half. The third quarter is where the Patriot defense really thrived. Coming out of the halftime break, the defense suffocated the Dominican offense into scoring only 5 points. The Patriots scored 18 and led 50-21 heading into the fourth quarter. Substituting liberally, the Patriots were still able to cruise to a 59-32 semi-final victory.

Coach Barbara Farris talked in her postgame interview about having the awesome crowd behind them at home and not playing in an emptly, stale arena hours away from home. The support was a testament to the program that she continued to build when she became the head coach. Saturday’s game will probably have every seat in the Patriots’ gym occupied. It should be an awesome atmosphere, a great environment and a fantastic game. Win or lose, these are the some of the memories that will be cherished by the students, athletes, parents and fans alike, for years to come.

Your support of this awesome event is greatly appreciated as we hope to put on a first class championship game. These girls deserve your support of them throughout this week and in the game on Saturday. Tipoff is set for 7:00 Saturday night at the lower school gym. 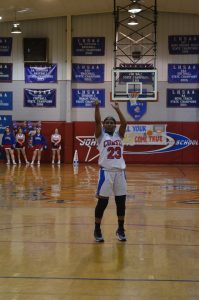