Perception is certainly not reality. For those who perceive our school as a “football” school is sadly mistaken. We are not an “anything” school. We are a school that pursues excellence in ALL that we do. We aren’t perfect. We aren’t for everyone. But, those who come, and stay, will be champions. Regardless of whether that means hoisting a trophy at the end of the season, or not. At this school, we build champions for life. The attitude of a champion. The effort of a champion. The discipline of a champion. The teamwork it takes to be a champion. It’s not easy. There are numerous bumps in the road. Games that are lost, homeworks that are missed, bad practices, a poor test grade, accidentally bringing the wrong uniform, forgetting to trim you hair, amongst many other things. It’s not just about gathering the best athletes out there, or the best students, to get the end result. It’s about the education we strive to give each and every one of our student-athletes on a daily basis. Both inside and outside the classroom. Coach Barbara Farris was quoted in the media saying this, “We have the best faculty, parents, students that come out and support us. Not just football. Not just baseball. Not just boys basketball. All the girls sports here get that support because we are like family.”

Saturday night, champions were on full display. After voting to allow schools to play games at a home school last year, most thought the opportunity would exist to play that game at a close to school, neutral site that could accommodate a large state championship crowd. After having to travel far away from home to face opponents that were minutes away, led to the vote to allow teams to play semi-final and championship games close to home. The state stepped in and said that the games MUST be played at the school’s home court and could not be played at a “neutral” site. So, the administration and school did it’s best to put forth a first class, championship environment based upon the gym we had to play in. The home court of the Patriots seats around 700 people. Athletic director Johnny Curtis, with the blessing of the school’s administration, worked tirelessly all week to prepare for this once in a lifetime opportunity to play a state championship game on it’s home court. Special lighting and sound was brought in. Team introductions rivaled those of an NBA game with lights being lowered and spotlights being shown on each player as they ran through their tunnel. Extra speakers were added so everyone could clearly hear each name being announced while music played in the background. Then, there were the fans. We would like to apologize that showed up and tried to get into the game, but couldn’t because of the sold out event. The fire marshal would not allow any more in for safety concerns. School personnel and administration did it’s best to be sure we followed all rules, laws and regulations to make this huge event happen.

Once the game started, you could tell both teams were playing with state championship jitters. Defense ruled the first quarter as both teams played to a 6-6 tie. After Mount Carmel took a lead on a three pointer, 9-6, the Patriots went on a huge 19-0 run, turning defense into offense. The lone mistake in that entire run was fouling a Mount Carmel shooter on an end of the half desperation shot with 0.3 seconds left, giving them free throws to end the half. The halftime score was 25-11 in favor of the Patriots. The Patriots followed the same script in the third quarter and pulled away even further, stretching the lead to 34-18 after three quarters of  play. The fourth quarter saw much of the sake and saw a championship end to a remarkable career for Jerkalia Jordan. The Patriots would win by a final score of 48-25. An unprecedented four year run of state championships by the Lady Patriots may be a record in the state’s highest classification. To top that off, Jordan won her fourth state championship MVP. Safe to say that’s never been done in the state’s highest classification. Perhaps not in any classification.

Never one to accept credit. Instead Jordan deflected all glory and honor to her teammates and coaches. She was just happy she could contribute to the team’s accomplishments through these years. She has handled herself with dignity and grace. Through trials and tribulations. She goes down as, perhaps, the best basketball player in Patriot history. Don’t ask her, though. She won’t accept it. She’s just a champion. And, that ain’t a bad way to be remembered, at all.

Congratulations to the team, the coaching staff (Barbara Farris, Tea Charles and Richard Engalander), the parents, fans, family and friends for their dedication and support during the 2019-2020 season. 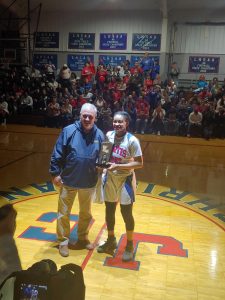 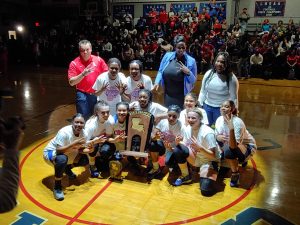